THE UNWRITTEN RULES OF BASEBALL 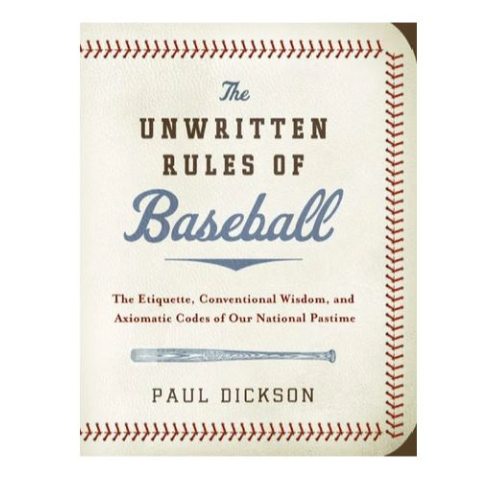 The Unwritten Rules of Baseball
The Etiquette, Conventional Wisdom, and Axiomatic Codes of Our National Pastime
By Paul Dickson

From beanballs to basebrawls, the most important rules governing the game of baseball have never been officially written down—until now.

They have no sanction from the Commissioner, appear nowhere in any official publication, and are generally not posted on any clubhouse wall. They represent a set of time-honored customs, rituals, and good manners that show a respect for the game, one’s teammates, and one’s opponents. Sometimes they contradict the official rulebook. The fans generally only hear about them when one is bent or broken, and it becomes news for a few days.

Now, for the first time ever, Paul Dickson has put these unwritten rules down on paper, covering every situation, whether on the field or in the clubhouse, press box, or stands. Along with entertaining baseball axioms, quotations, and rules of thumb, this essential volume contains the collected wisdom of dozens of players, managers, and reporters on the secret rules that you break at your own risk, such as:

1.7.1. In a Fight, Everyone Must Leave the Bench and the Bullpen Has to Join In

5.1.0. In Areas That Have Two Baseball Teams, Any Given Fan Can Only Really Root For One of Them

Be the first to review “THE UNWRITTEN RULES OF BASEBALL”
SKU: 180022 Categories: Accessories for Him, Books for the Home